Bow Creek Wharf is the title of my own personal  project, set in the East london docks during the immediate post WW2 era, 1946. This will be a model railway layout based on a fictional extension of the old London & Blackwall line that ran from Fenchurch St. station to Blackwall, near to Brunswick wharf on the  River Thames.

I have assumed that the line carried on through Blackwall and swung northwards on a sharp curve through the East India Docks and along side Orchard Place,  the name of the road in the middle of a small peninsular of land surrounded by the River Lea, also known as Bow Creek

The original line that terminated at Blackwall had a passenger service only until the mid 1920’s with goods, serving the various docks and warehouses, carrying on for some time after. My fictional line extension will be based in the immediate post WW2 era, c’46, I have assumed that the passenger service continued although  goods and trip freights dominate the traffic. The layout will centre on the wharf, with transfer sidings, receiving and sending out trip freights to and from Temple Meads (Stratford), Millwall  and Goodmans Yard. These transfer sidings serve an ex GER warehouse, which will be based on the old GER owned Pepper warehouse that was further along Bow Creek, now owned (1946) by the LNER. The sidings also serve a coalyard and a short tramway that serves some of the river side industries (Oil works, and boiler smiths).

The passenger station will also feature on the layout , although this will be part of the background feature with surrounding buildings and industrial premises and a road over bridge connecting the main road with the dock and warehouses.

The above sketch is some what compressed in its length and in reality would be a lot longer in relation to the depth, so please try to imagine it a little more stretched out. As can be seen in the lower drawing it is proposed to be part of a larger scheme at a later date. The junction with the main line at (B) will be based on Stepney Jct. on the exLT&SR line which was where the original Blackwall line branched off. This would be on brick viaduct, as the GER so often did. This part of the layout would be at a height of 60″ from floor level to the top of the viaduct parapet, a little under eye level for me. It is basically four tracks coming out from the London end (storage loops), as far as the jct. with double track continuing on the main line to the left to either Stratford,LNER, or the LT&SR (LMS in ’46) via Gas Factory Jct., and the other double track , branching to the right, down to Bow Creek via Millwall. There may be further changes to this plan with regards to the track layout so please take a look now and again, I will welcome your comments, critical and constructive.

Stepney Jct. The inspiration for the main line section on the proposed layout.

At position (E) would be the jct. station with the tall wooden signal box, that I feel characterised Stepney, at the apex of the platforms serving the down branch and up main. At position (F) I have thoughts on a large rail served warehouse similar to Goodmans yard that was by the station throat of Fenchurch St. station. At (D) would be the cassettes/storage loops under the Bow Creek section. The area at (C) will be the position of the Ex GER pepper warehouse, track layout yet to be determined, served by the exchange sidings by Bow Creek Wharf.

So the initial idea is to start on the Bow Creek area, perhaps being used with cassettes at position (A), the Blackwall end, until the rest can be built at a later stage.

As I mentioned earlier the inspiration for the layout centres on the transfer sidings and the ex GER pepper warehouse that were situated on Bow Creek. In reality these were connected to the rest of the system at Canning town on the North Woolwich branch, but for my purposes I have altered the geography and shifted them round the creek (or should I say “up the creek”).

The picture below shows the edge of the wharf by the exchange sidings at Canning Town and this is what I will base the front edge of the layout on.

This next photo shows the Pepper warehouses and the barge bank on Bow Creek and will be the prototype for my warehouse and wharf. 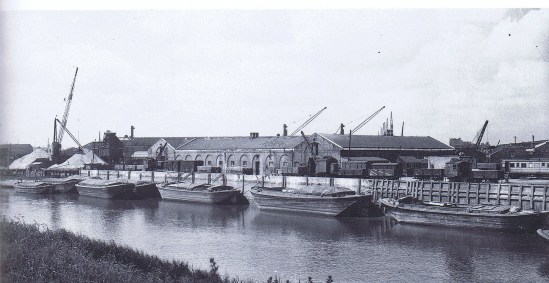 This will be enough work to see me out (Ha, Ha,)through retirement, so I’d better get cracking !